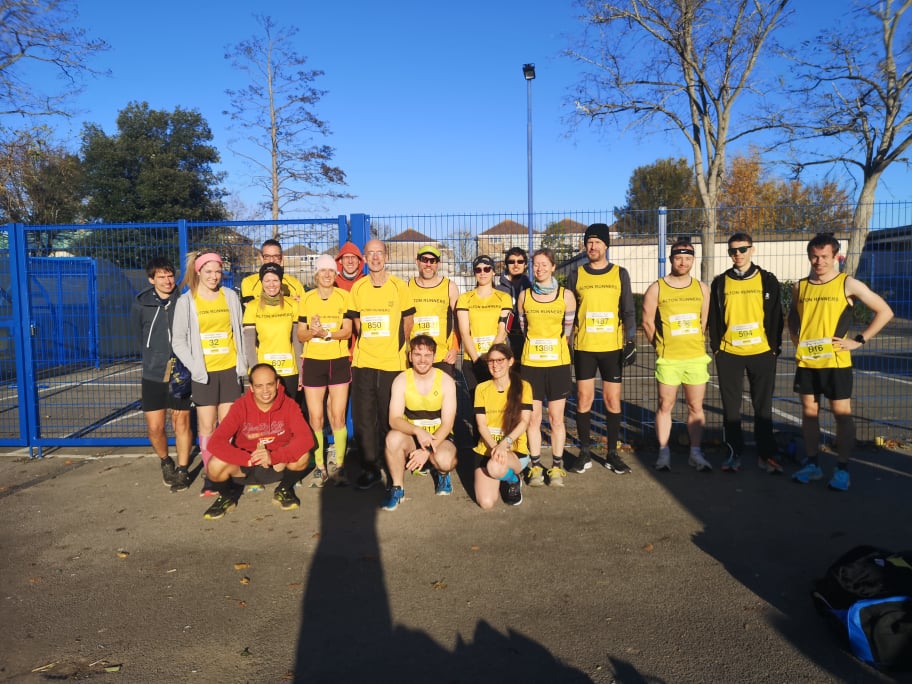 Twenty one club members from Alton Runners took part in the Gosport half marathon on a Sunday in November as part of the Hampshire Road Race League. Making a return after a two-year absence there were an impressive 1,322 finishers across the line at the town's Bay House School.

The route took in the Lee-on-the-Solent coastline before coming back along the promenade on the 13.1 mile course. Although it was a dry and sunny day, the wind was a seemingly perpetual challenge, as Jim Armitage recalls “it didn’t matter which way we ran along the sea front, East to West or West to East, there was always a head wind.”

Fellow club member, Joe Murrell concurred, “I didn’t pace it very well but I got a PB today, despite facing lots of head wind! Six of our team got back with impressive sub 90 minute times so we did really well”.

The first to cross the finish line for Alton Runners was Alistair Morey with a chip time of 1 hour 22 minutes, finishing in 68th position overall and 6th in the men’s V45 category. Other notable results include Hugh Bethell and Vanessa Lowe who finished 2nd and 3rd in their respective age categories.

With more than a third of the team coming away with personal best times, it was certainly a day for celebration. Lending itself to the atmosphere was live music playing throughout the race and Gosport half marathon is well known for the energetic band placed midway along the two-lap course. Runner Jane Scrase comments, “it was a really well organised race, lots of supporters and a live samba band - they need an award for keeping the beat for the whole race!”

Along with brilliant times and a much-admired goodie bag, club member Adam Maskill lists something more unexpected among his race highlights “I got multiple pbs today for 10k, 10 miles and half marathon distances. Plus, the goodie bag at the end was bottomless! During the race I had two massive blisters under both big toes and felt one of them pop and ‘thhhhhhhh’ – out came all the blister juice. The ‘thhhhhhhh’ was definitely the highlight of the race for me!”

Thankfully, most runners were pleased with more conventional achievements on the day and a few were particularly surprised, including Jo Scawn “I knocked 8 minutes off my half marathon pb, which was a pleasant surprise as I’m only a few weeks out of being poorly and was worried it had affected my lungs. Clearly not!”

Another club member who exceeded her own expectations on the day was Carly Eeles, “I went to Gosport very nervous that I wouldn’t even make it all the way round as the most I’ve run on average was about 4 miles in the last couple of months, mainly due to life just being busy! Lots of people had told me it’s a lovely, flat course along the seafront and it certainly didn’t disappoint. There were plenty of happy, positive marshals that recognised when you needed a bit of motivation. The steel band was awesome and I’m so pleased we got to see them four times on the way round! I felt good until about 9.5 miles in, then I started feeling every… single… stride. A combination of walk/run, as well as an awesome crowd and fellow runners, got me through that finish line. I had no idea what time I had done it in as I couldn’t find my running watch that morning! So imagine my surprise when I learned that I had set myself a new PB, by just 12 seconds!!! I am already imagining what time I could do it in next year if I find the time to train properly for it!”

Many club members have run the Gosport half marathon in previous years and were pleased to be back. Stephen Clow was no exception, "I have fond memories of this course having set a PB back in 2018. It was a joy to be back after no race last year. The weather was sparkling, the marshals were fab and the drums were inspiring yet again. I was very happy with my time after such a long break without a half marathon on the road. Well done to all the Alton Runners team”