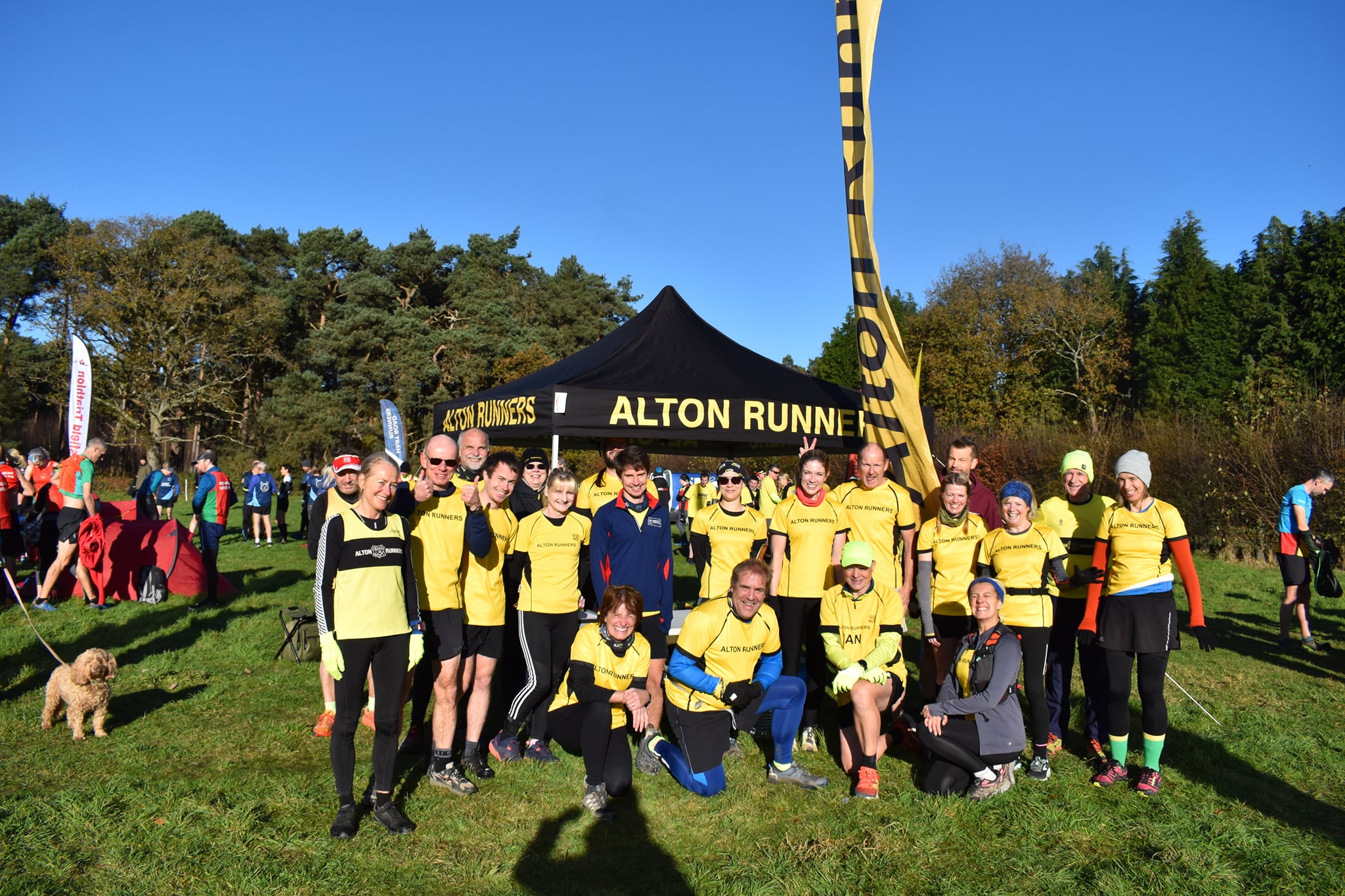 As an especially cold front swept across Britain last week, just under 400 brave souls lined up to take on the Bourne Woods Cross Country race as part of the Southern Cross Country League. Organised by Farnham Runners the 5 miles course took runners through stunning frosty woodlands in the bright winter sunshine, covering nearly 400ft of elevation as they went.

Joining fellow teams in the race village were 23 Alton Runners keen to get moving on the chilly mid morning race. As ever, it didn’t disappoint and the icy conditions helped to keep the mud at bay. Racing for the first time at Bourne Woods, club member James Perrett commented “I was almost disappointed at the lack of mud. I’ve done road races and come back with more on my legs!”

One runner quite happy not to be covered in mud was Jane Scrase “I really enjoyed it today and it is still my favourite as it’s all on woodland paths. No grass, no gravel, no cow fields, no mud… just lots of hills!”

Chasing Jane for most of the race was George Longland “I wasn’t sure I had done this race before until we hit a false summit and it all came back to me from a few years ago! That absolute relief of getting to the top of a particularly gruelling climb, only to find that there’s another sneaky hill waiting for you. It was worth it for such a great experience though… I loved seeing all the teams together and being cheered along by friendly marshals”

New club member, Andrew Tarrant was another to be surprised by the hills on the route “I absolutely loved it today. Such a beautiful course and great marshals. But my daughter lied to me! She told me it was a flat course with just a little hill at the end! I will forgive her but only when she makes me a cake”

It seems that cake wasn’t the only sustenance on people’s minds this weekend. When asked about race preparations a familiar thread began to emerge among the Alton team, as Alistair Smith admitted “my preparation for Sunday was to go out and drink enough on Friday to still have a hangover for the race. It wasn’t a planned strategy and I wouldn’t recommend it!”. Fellow club member, Darren Pratt concurred, “yes, six pints of Guinness the night before wasn’t ideal race prep for me either”.

Coming in first for the Alton Runners and 11th overall, you would think that Chris Birch would have more of a strict health regime in place. “Because the race started at 11am I thought it would be fine to pop to the pub the night before… thankfully I had a can of coke and a box of Turkish delight to scoff just before the race started so I was firing on all cylinders!”

With Christmas upon us, runners can be forgiven for letting their hair down for the festive season although Abbie Tarrant fears that she may not be excused so easily, “I feel bad admitting this but I practically shoved someone out of the way today! She wouldn’t let me by and was tactically blocking me on the race. I was so frustrated and in the end gently pushed by her to overtake. It’s not something I would usually do and felt so awful afterwards!”

In light of some rather naughty behaviours, it remains to be seen whether a few club members will make it onto Santa’s Nice list this year. With Alton Runners currently in an impressive 7th place in the league table, hopes turn to the next Southern Cross Country race at Lord Wandsworth on 19th December to stay on track. Until then, wheatgrass smoothies and helping old ladies across the road is top priority.