The origins of each run on a racing calendar are many and varied but often there is a charitable cause at the heart of things. As the name suggests, the Mind Awareness Ropley 10K on March 20th was no exception and race organiser, Vanessa Lowe was moved to action by a deep sadness close to her heart.

“Sadly, one of my best friend’s lost their son to suicide last year and asked me to support her in her grief by fundraising for Mind. I said yes immediately and this race was born out of that need to support in some small way. Mind is a mental health charity that helps so many people struggling with anxiety, depression and all the complex issues associated with mental health. As runners, we all experience the feel-good endorphins and life-balancing benefits of running singularly and together as a club. I thought that if we could raise awareness of this and help mental health strugglers experience the positivity of recreational club running, we would be doing a good thing”

Starting and finishing at the Sports Pavillion, the race was a beautiful yet tough undulating course along the lanes and hills of Ropley. The sun shone and feedback from the runners was universally positive, as Jane Scrase explains “I had a lovely run with fellow club member, Carly, pulling each other along, chatting (on the flat parts) and zooming down the hills together (we decided we could walk a little uphill if we offset it downhill). The weather was perfect, the marshals were lovely and I enjoyed the cup of tea and cakes at the end. My ‘medal’ biscuit was delicious too!”

New Chair of Alton Runners, Jim Armitage agrees “It was a well organised event and raised awareness and funds for a very worthy charity. It was great to be in the company of so many members of Alton Runners - in all of the 12 years or so that I've been a member of the club, I don't think that we have done anything like this before. It says something about the strength that we have in our older age groups when I could only manage 4th place in the Men's V60 category!”

Despite the hills, the overall pace of the day was fast. James Perrett was narrowly beaten by Alex Hall, but remains pleased with his own efforts “I did well to claim second place and knew we were on for a good time when we overtook the lead cyclist going up a hill!”

The lead cyclist in question was Richard Scrase, who remains positive, despite the inevitable teasing from fellow club members. “Obviously it's slightly embarrassing but I am also amazed at the front runners. I set off with Alex Hall close behind, making sure I was never too far ahead. As we went up the hill, he maintained his speed and I noticed James just behind him. As it got steeper, they both passed and I was slowing down. Then it was one by one, Steve Drysdale, Richard Taylor… it says a lot about the speed and strength of these runners as the hill was getting steeper and they were not slowing down! It's going to be a good memory and will always be a talking point at least!”

Whilst a good finish position is the goal of some runners, when asked the post-race question “what was your goal today?”, it isn’t uncommon to get the reply “I was just hoping to get round!” For one club member, this was more than just a throwaway comment though. Just four weeks before race day, Dave Eggleton had undergone surgery that had proved to be a surprise for both himself and the surgeons involved. 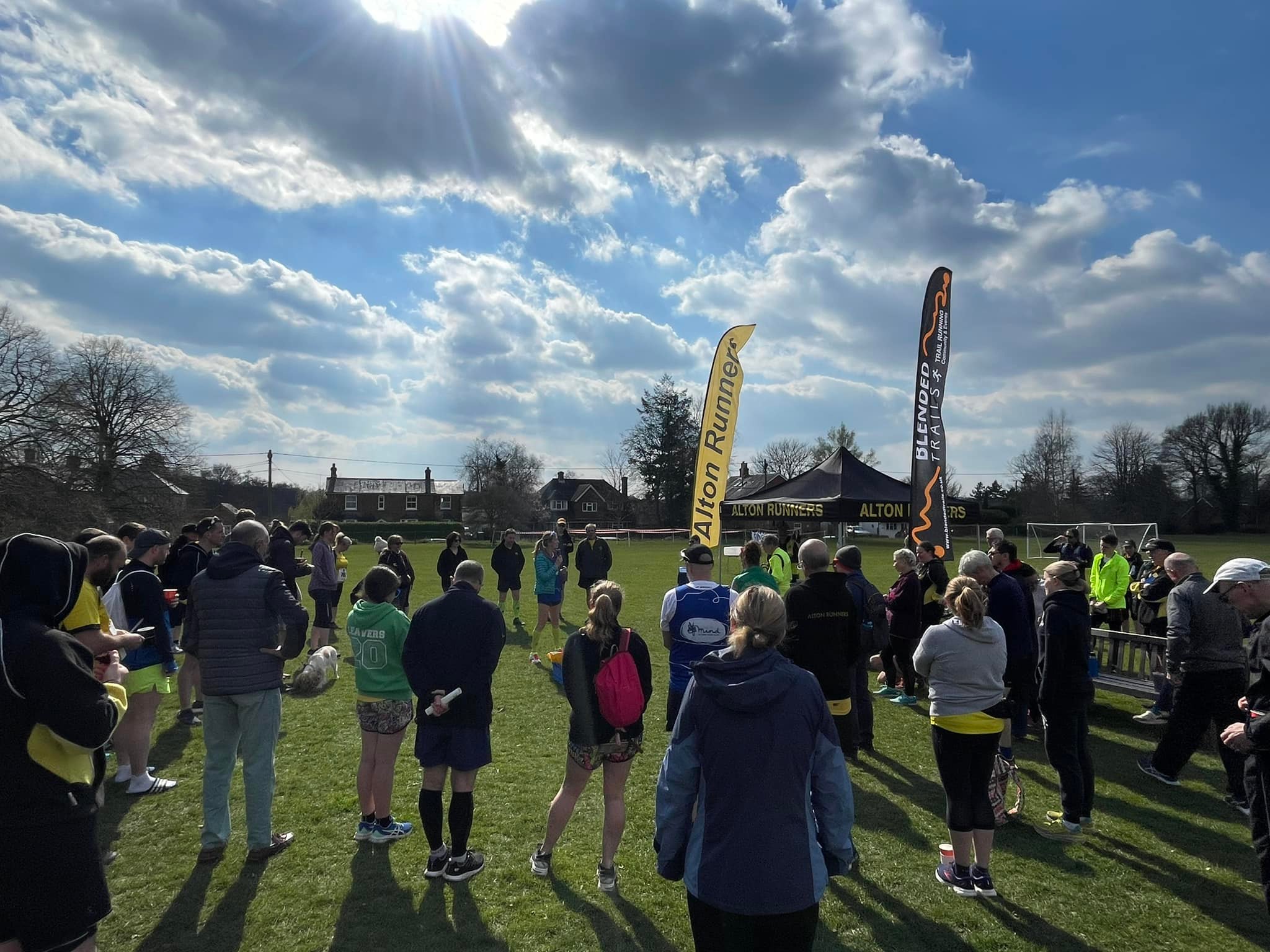 “Just two days after running a marathon I had tummy pains and was taken into hospital with a suspected appendicitis. However, when they opened me up, my appendix was fine and instead my gall bladder was found to be dead and gangrenous, requiring immediate further surgery. The first person I saw when I woke up was the surgeon who had removed my gall bladder, which until then I hadn’t even known was an issue. I am only thankful I had signed a disclaimer allowing them to take whatever course of action was necessary! Rather understandably I felt pretty tired after the race but it all felt okay and my scars were good. I am only hoping now that the stone of weight I lost will help my long term running goals!”.

Another runner facing challenges was Darren Pratt, who had given himself the very specific goal of ‘not falling over’ during the race. “I have fallen a few times recently and knew I just needed to take it carefully and finish the race, rather than worrying about my pace and risking further injury”. Fellow teammate, Ian Urquhart is so used to Darren’s mishaps that he has now given him an honorary title “Craig and I run regularly with Darren and he has certainly been in the wars a bit. I saw a Mr Tumble book this week and knew exactly who it reminded me of. I presented it to Darren as a special prize at the race and he is now Mr Tumble!” Darren’s response to winning the prestigious award is sadly unprintable but he did manage to stay upright and enjoy the race.

Winner of the youngest runner award went to Lola Powell, aged 13, who was excited to finish just ahead of her mum - especially on a day when she’d decided to take it at a gentle pace. “It was really challenging and I was so pleased to get a sub 60 time on a 10k. Most of all though, I was honoured to be allowed to take part!”

After the race, the fifty runners and fellow club volunteers gathered for tea, cake and prizes, which had been baked, brewed and donated by kind individuals and companies. Among the prize winners were beer-loving Jim Armitage and cake-loving Dominic Nixon, who won beer and café vouchers respectively and caused much cheering from the crowd.

The support given to the event was key to its success, according to Vanessa, “The Mind Awareness Ropley 10K was supported by so many local businesses keen to help in highlighting the importance on mental health. Big thanks go to Bottega dei Sapori in Alton, Pulpo Negro in Alresford, The Flower Pots at Cheriton, J H Beauty and Seasons Yoga who all got behind the Charity by donating gift vouchers as well as Anne Humm & Jane Booth who donated Personal Training & Sports Massage sessions. Becky at Arlebury Park made the MIND biscuit medals for all participants crossing the finish line and Alton Sports gave 13 generous goodie bags. On top of that, Ollie Steele-Perkins of Blended Trails loaned and coordinated the chip timing and Philip Scrase of Alton Runners took on the role of Race Director, along with countless volunteers who marshalled and helped things run smoothly on the day”

Vanessa Lowe is a well-loved and highly experienced Coach with Alton Runners and this event is a testament to the respect she has within the club, as fellow coach George Longland maintains, “Everybody loves Vanessa. Her energy, her enthusiasm and her positivity are infectious and you cannot help but be swept along by them. It is no surprise to any of us that this event was such a huge success and we only hope it can now become an annual event!”

Modest as ever, Vanessa only has thanks and praise for the club she is a part of “Words cannot describe how proud my fellow runners have made me and in the grey world of mental health suffering, they brought sunshine and positivity in what they did and achieved. Together we raised £1,720 and donations are still coming in. The day was magical and I felt the love and kindness of a super group of talented running people all around me.

I've always know there was something special about Alton Runners but I have been moved to tears with the compassion and generosity shown. The photos tell everything - the smiles, the kindness, the fun. I belong to the best running club in the entire world and I love everyone to bits. I intend to thank each and every one who donated and ran in person but for now can I just say an ENORMOUS thank you from the heart of my trainers”

Vanessa will be running the Brighton marathon on 10th April and the link for donations is still open: